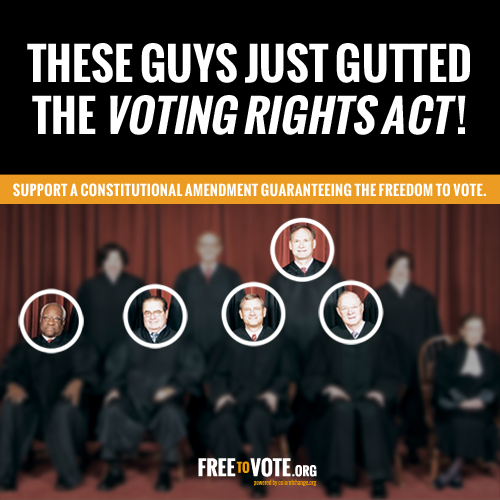 The Voting Rights Act Has Been Gutted

Section 2. The Congress shall have power to enforce this article by appropriate legislation.

Who has the right to determine what’s appropriate to safeguard the right to vote? Is it a Congress comprised of representatives of the people, with full fact-finding authority, which in 2005-06 “held 21 hearings, heard from scores of witnesses, received a number of investigative reports and other written documentation of continuing discrimination in covered jurisdictions… [compiling] more than 15,000 pages” of evidence for the legislative record, and passed Voting Rights Act reauthorization by lopsided bipartisan majorities of 98-0 in the Senate and 390-33 in the House?

No, apparently, it’s a conservative activist Supreme Court, which in its 5-4 decision today determined that Congress’ 2006 reauthorization of the Voting Rights Act did not adequately reflect current conditions and unconstitutionally infringed on states’ rights to regulate their own elections. Equal “dignity” for the states, a bare majority holds, matters more than equal protection for their voters.

Read the entire article for a comprehensive explanation of the ruling.

Support a Constitutional Amendment Guaranteeing the Freedom to Vote

I am deeply disappointed with the Supreme Court’s decision today. For nearly 50 years, the Voting Rights Act – enacted and repeatedly renewed by wide bipartisan majorities in Congress – has helped secure the right to vote for millions of Americans. Today’s decision invalidating one of its core provisions upsets decades of well-established practices that help make sure voting is fair, especially in places where voting discrimination has been historically prevalent.

As a nation, we’ve made a great deal of progress towards guaranteeing every American the right to vote. But, as the Supreme Court recognized, voting discrimination still exists. And while today’s decision is a setback, it doesn’t represent the end of our efforts to end voting discrimination. I am calling on Congress to pass legislation to ensure every American has equal access to the polls. My Administration will continue to do everything in its power to ensure a fair and equal voting process.