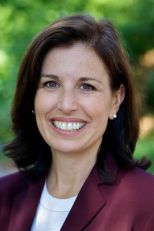 State Senator Gayle Slossberg (14th Senate District) is a passionate advocate for the people in her district and the issues that affect them most.

First elected in 2004, Senator Slossberg is currently the Assistant President Pro Tempore. She is the Senate Chair of the Human Services Committee, Vice Chair of the Public Health Committee and Vice Chair of the Veterans Affairs Committee. Senator Slossberg served as the Senate Chair of the Commission on Enhancing Agency Outcomes, a panel charged with the responsibility of streamlining state government, finding efficiencies and restructuring government to better meet the needs of our citizens.  This bipartisan panel identified nearly $450 million in savings, which required neither tax increases nor spending cuts to implement.

Prior to her service as State Senator, Gayle served locally here in Milford on the Board of Aldermen from 2001 until her election to the state Senate in 2004. She is a past president of the Mathewson Elementary School PTA, and has held other community neighborhood service positions including: teaching at Congregation Or Shalom; participating with the Milford United Soccer Club; Babe Ruth League; Milford National Little League; Milford International Little League and Devon Rotary as a Paul Harris fellow.

Click Here To View a Google Map of the District